Your basket is empty.

Multiphonics for clarinet with German keysystem

The PAXMAN Horn Quartet Gig Book is a one-volume solution for your next quartet gig. With chapters like I. SACRED MUSIC, II. OCCASIONAL MUSIC, III. THE HUNT und IV. LITTLE CONCERT PIECES, it covers a wide range of occasions from solemn to festive.

A few old favourites are included among the 89 pieces, but most are new arrangements that span five centuries of musical style. Also present are original works for horn quartet that have been out of print for generations. Novelties include a fresh transcription from manuscript sources of a well known classic as well as the first performing edition of a long neglected gem.

What’s more, detailed programme notes for every piece can be downloaded and inserted directly into your own programme booklets: Programm notes

The author William Melton is a career hornist with a German orchestra. Over the last forty years he has arranged horn quartets and played in quartet performances throughout Europe, North America, Asia and Australia.

From the Foreword / Aus dem Vorwort

Compilations of horn music have a long history. Chapbooks of horn calls for use on the hunt, like those in Le livre de chasse by Gaston de Foix or Hardouin’s Trésor de vénerie, have come down to us from the late middle ages. More recently, hornists of the Romantic era such as Friedrich Gumpert and Alfred Diewitz produced collections of marches, dances and hymns arranged for their preferred ensemble, the horn quartet. Since then those anthologies (and their successor, the Green Books) have often been heard on festive occasions. Their compact and organised format saved players from juggling sheaves of separate quartets. There is enough risk associated with horn playing without adding a mad scramble for music to the equation of cold concert venue, poor lighting, impatient audience, nervous host … (the potential distractions go on).

The older compendiums are now showing their age, and harbour many disadvantages for modern hornists. The selections are heavily weighted towards the hunt or folk music pieces that are outmoded for contemporary audiences. The average hornist’s technique has improved mightily in the last century, so the preponderance of low, dark keys that these collections employed can be avoided and the range spread out (both higher and lower), resulting in a brighter, more open sound. The first horn in the older arrangements is rarely given a break from the melodic line, but if third horn is assigned a larger share the first horn’s endurance can be greatly extended. Further, the use of key signatures (sometimes up to six flats), dependence on complicated systems of repeats (which can easily be missed in the heat of battle), awkward page turns, and the use of ‘old’ bass clef — all of these previous characteristics can make playing harder than it needs to be. Authentic horn notation, always employing accidentals rather than key signatures, also makes a quick transposition into a lower key (if the first horn is tiring) a much easier proposition.

Hence these books. They address many social occasions where music might be required (weddings, birthdays, funerals, worship services, parties, holidays, etc.). Musical epochs from Renaissance* to early 20th century are represented in the over seventy new arrangements, and a few of the old favourites have been retained. The Rimsky-Korsakov Notturno is one of the latter, but has previously existed only in a version that contains many markings not by the composer. The edition included here is faithful to the two St. Petersburg manuscrip sources of the work. Research in libraries across Germany has yielded a number of original works for horn quartet out of print for generations, like Carl August Hänsel's complete Quatuors originaux, Op. 75. The Tchaikovsky Adagio for Horn Quartet fragment first appears here in a performing version, rounded out with an optional ending employing another Tchaikovsky work.

An appendix gives full scores of two trios (one solemn, one lively) in the instance of a tardy quartet member. The present format is a compromise; small enough to fit into a horn case easily, but large enough to avoid squinting at microscopic noteheads. The ring binding assures that the pages will remain securely open during play. Extensive programme notes will be posted on the publisher's website, and performers are welcome to download and insert these notes into their programme booklets. 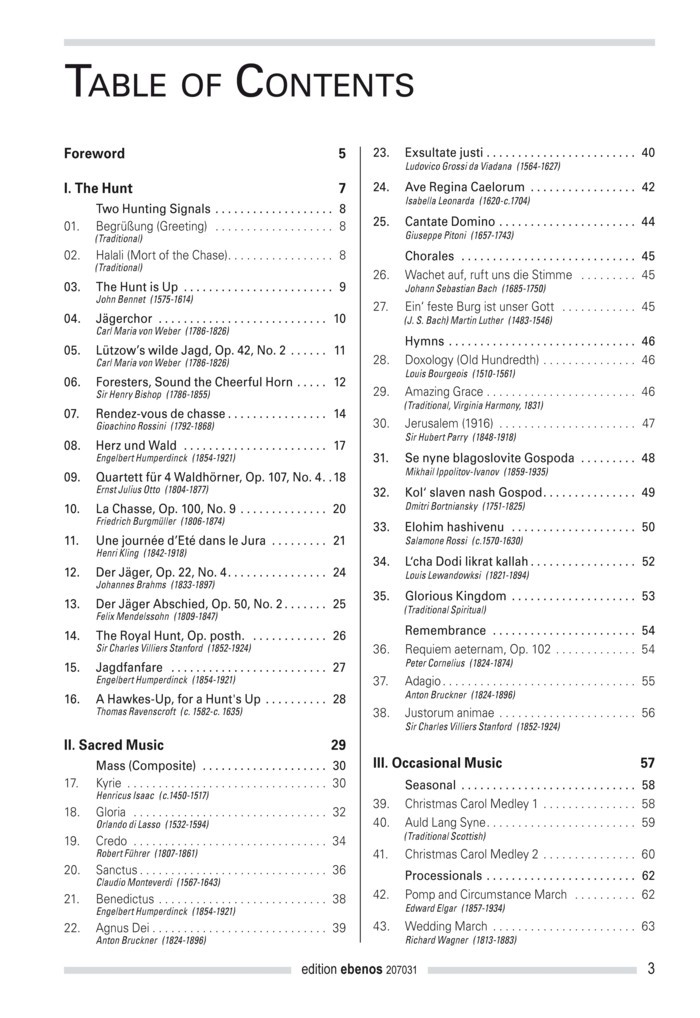 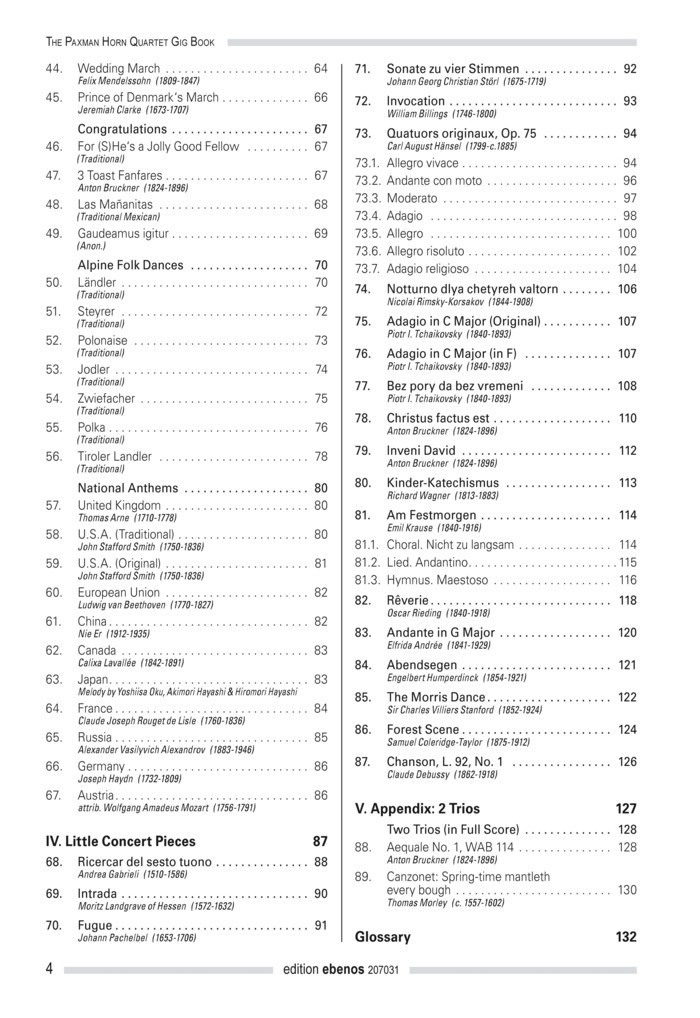