This album of 24 transcriptions for horn quartet brings unsung works to concert programs. Whether composed by a 17th century nun, 18th century aristocrat, 19th century virtuoso, or 20th century activist, the collection offers a choice sampling of the quality and variety of music created by women.

From the Foreword / Aus dem Vorwort

Women have been documented as creators of music since the ancient world, though most of what they produced was neglected, if not actively suppressed. The neglect may have been caused by the shadow of better-known male relatives (or disguised by male pseudonyms), the rigors of performing life, or of a creative gift subsumed by motherhood or religious service. “In the past,” wrote Rhian Samuel, “to compose, let alone be heard, a woman has needed to conquer social restriction and taboo.” Progress was made in the late 19th century as women attended musical conservatories in large numbers, causing Otto Ebel to enthuse in 1902, “it is likely that the new century may produce as great musical composers among women as it has in the past among men.” The 20th Century did see many women composers successfully challenge hostile establishments and environments. While this was a positive development, it left the contributions of predecessors from previous centuries largely undiscovered.

Finding the music of earlier women composers remains a challenge, but in recent decades scholars have brought much of it to light. “If much of the music of women of the past has been lost or become relatively inaccessible,” Julie Ann Sadie wrote, “a remarkable amount has survived and is retrievable.” This collection bears witness to the quality of women’s compositions, but every hornist is encouraged to look into this repertory on their own: many gems still lie hidden.

The three chapters in this volume offer sacred, occasional and concert music. Quartet arrangements do away with difficulties like “old” bass clef and complicated key signatures, while ample courtesy accidentals and breaks from upper register play have been supplied. Varied styles can be a blessing for the audience as well as the performers, so selections here span the eras of Maddalena Casulana (born ca. 1544) through Lili Boulanger (born 1893). 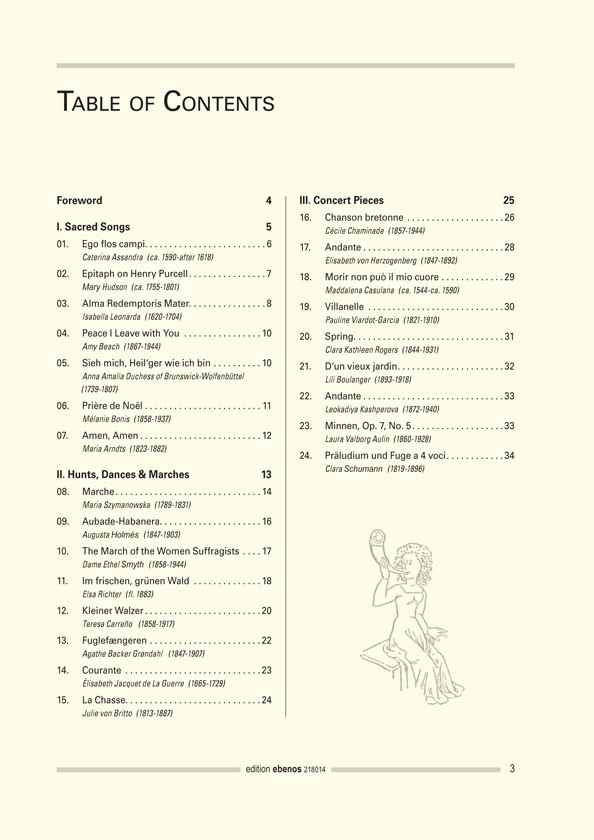